We’re excited to share the Fitzgerald-related work of Society members here! We think we do a decent job of keeping up with Scott and Zelda-related books and articles but if we miss one please email us at fitzgeraldsociety@gmail.com and we’ll get it added asap! 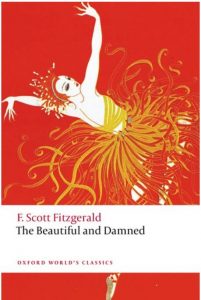 The Beautiful and Damned is the red-headed stepchild of F. Scott Fitzgerald’s oeuvre. As this second novel turns 100 in 2022, we are committed to redeeming its reputation. First up, Society vice-president William Blazek has written a new introduction and notes for the Oxford’s World Classics series that rightly reframes this devastating portrait of a generation of wealthy young Americans who struggle to find meaning and happiness in their lives. The sophisticated but emotionally fragile Anthony Patch enjoys an initially idyllic marriage to the beautiful Gloria Gilbert. But their intense romance turns sour as they waste their time and energy in decadent leisure and luxury. Their happiness comes to depend on gaining a vast inheritance from Anthony’s grandfather, but they are stifled by their inner fears and are ill-prepared for the inevitable loss of youth and prosperity. Set amid the vibrant social and commercial world of New York in the early twentieth century, the novel expresses the promise and disillusionment of America at the start of the Jazz Age. This is an eminently affordable edition, designed to be taken to the beach! 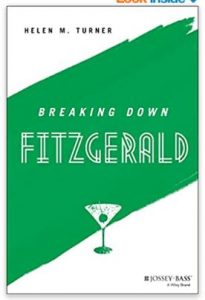 Breaking Down Fitzgerald provides readers with an overview of Fitzgerald’s life and investigates the composition, characters, themes, symbols, language, and motifs in his work and their relation to contemporary society. Author Helen Turner clarifies some essential facts about F. Scott Fitzgerald’s life and addresses important themes found in his novels and short stories. As readers explore the literary and cultural context of Fitzgerald’s works, they develop a firm appreciation of Fitzgerald’s role in modern literature and why he is considered one of the greatest American writers of the 20th century. This is a great book for secondary educators! Helen will serve as program director for our 2023 conference in Växjö. 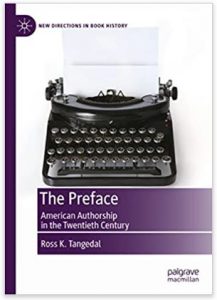 Building on insights from the fields of textual criticism, bibliography, narratology, authorship studies, and book history, The Preface: American Authorship in the Twentieth Century examines the role that prefaces played in the development of professional authorship in America. Many of the prefaces written by American writers in the twentieth century catalogue the shifting landscape of a more self-consciously professionalized trade, one fraught with tension and compromise, and influenced by evolving reading publics. With analyses of Willa Cather, Ring Lardner, F. Scott Fitzgerald, Ernest Hemingway, Robert Penn Warren, and Toni Morrison, Ross K. Tangedal argues that writers used prefaces as a means of expanding and complicating authority over their work and, ultimately, as a way to write about their careers. Tangedal’s approach offers a new way of examining American writers in the evolving literary marketplace of the twentieth century. The chapter on Fitzgerald originally appeared in the 2017 Fitzgerald Review!